Past Landslides in Teton County

During the 1920's, several persistent small earthquakes shook areas of Teton County, especially the eastern side. These earthquakes increased in number during the spring of 1925, which coincidentally was an unusually wet year. Several Jackson Hole residents in the Gros Ventres reported seeing new freshwater springs pop up in hillsides where they never existed before.

On June 22, 1925 the valley experienced, what is estimated through first-hand accounts to be, a magnitude 4 earthquake. Around 4 p.m. on June 23, 1925, local farmer Guil Huff was on horseback in the Gros Ventre canyon looking for loose cattle. All of a sudden, he saw a 30-to-40 foot high riverbank on the south side of the Gros Ventre river collapse into the water. After that the entire side of the mountain came rushing down, carrying with it boulders, trees, and earth. Guil estimated that the entire event happened in about a minute and a half, and if it weren't for the horse he was riding he would have been buried instantaneously.

Impact of the Gros Ventre Slide

The Gros Ventre Slide brought down 50 million cubic yards of debris from the south side of the Gros Ventre canyon. The slide moved 2,100 vertical feet while traveling 1.5 miles. The entire debris field was 2,000 feet wide, 225 feet deep at the river, and climbed 350 feet up the opposite north side of the canyon. This huge amount of earth formed a natural dam in the Gros Ventre river that formed Lower Slide Lake.

No one was injured or killed by the Gros Ventre Slide itself, but two years later 6 people in the town of Kelly were killed by the ensuing flash flood when the natural dam formed by the slide broke (Windows Into the Earth; Smith and Siegel, 2000).

The state’s record snow pack and above-average precipitation in the spring of 2011 caused a massive landslide in Snake River Canyon on May 14, 2011. The slowly moving mass of mud, rock and trees crossed the highway 26, blocking about 300 feet of the road, covering the pavement to depths of up to 50 feet and eventually flowing into the Snake River. The length of slide was about 2,000 feet and contractors hauled away an estimated 200,000 cubic yards of debris.

The commuter corridor for residents of Alpine and Star Valley remained closed for almost 2 weeks, forcing the average of 5,740 vehicles that commute to and from Jackson every day, to take a 74-mile long detour through Idaho and Teton Pass. 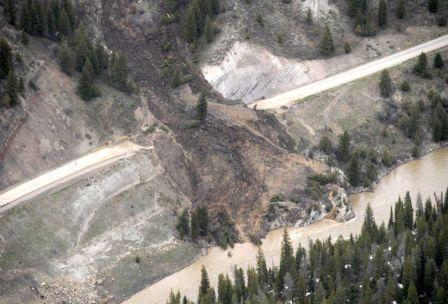